Dakshin is a must try for everyone! There goes my post in one sentence. The food is exceptionally good, the flavours are just too crazy, the authenticity is as good as you sitting in one of these Coastal places and enjoying the dishes, and the experience is just exemplary.

The very calm and serene ambience of the place, the gajras (jasmine flowers), the gorgeous shiny cutlery, the tunes playing in the background, the warm and courteous service- it made the experience very very special and an extremely relaxed one.

The seafood festival of Dakshin revolved around the food of the Karavali region. Hence, the name Karavali Seafood Festival. Karavali is the region along the coastal line of Karnataka. It starts from the end of Goa and goes till some part of Kerala. The flavours and spices used in this region are very distinctive in terms of their robustness and aroma, and this I know because I have travelled South India and experienced the food scene over there with great enthusiasm. Also, coconut is very widely used in this region. 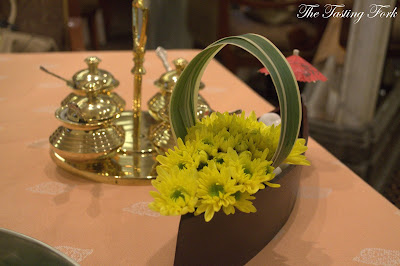 Chef Vellu Murugan who is from Kerala himself, has worked in the Southern region along with growing up there, and knows the food inside out. His spin to the dishes, the flavours and simplicity of some of them, steering as away from complexity and being as close to the roots as you can find, has very well paid off. I am extremely happy and satisfied after this meal.

The restaurant replicated dishes of the Karavali region in this festival (mostly seafood), and did justice to every single dish they had on their menu. My experience of the dishes is as below:

We were first served with some complimentary papaddams and four kinds of chutneys- tamarind, ginger, coconut and tomato. Loved the tomato and ginger chutney! Every table had four kinds of gunpowder kept on it as well. It cannot get more authentic than this!! 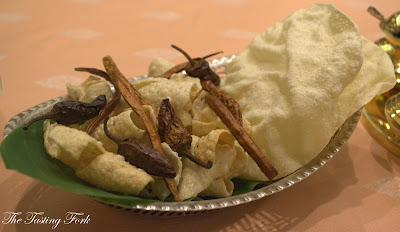 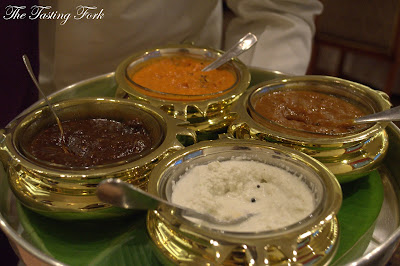 Gobhi Kempu Bezule: This was a little tangy in taste and was tossed in onions and masala. Spicy but not so much that you can't handle. As the menu was very limited for the vegetarians (because it was the 'seafood' festival), it still wasn't something I would order again even if I was a vegetarian, mainly because of the tangy flavour. 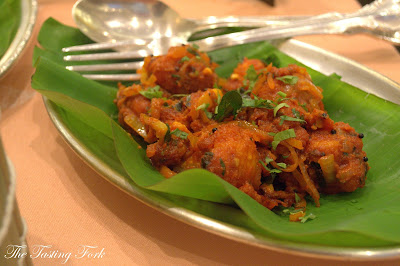 Alvemande Phodi: This was arbi coated with some spices. It was slightly spicy but definitely didn't do anything for my tastebuds. Avoidable. 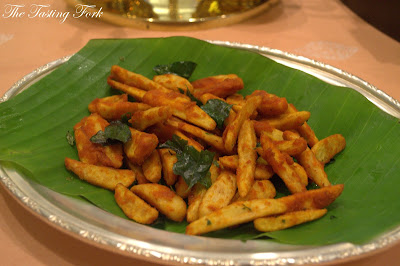 Shrimps Balchao: This was made with peppercorns (kali mirch) and malt vinegar. The prawns were cooked beautifully and weren't one bit undercooked. With some thick gravy coated on the prawns, this was a very good dish. 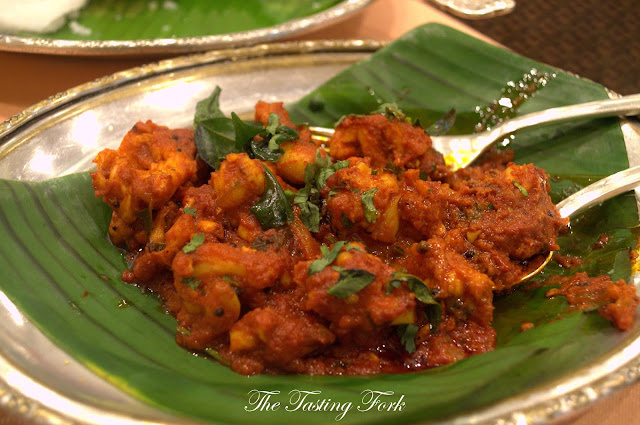 Neitha Kori: This was a chicken dish made in a tomato gravy and wasn't salty or spicy. It was slightly sweet and was a typical sort of a dish that nobody can dislike. For the ones who like to play it safe, this is your dish! Very delicious. 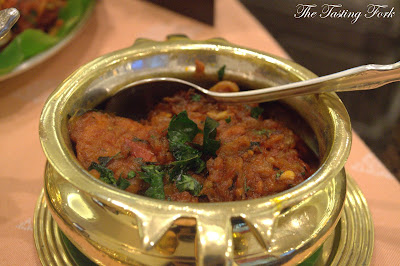 Mamsam Pepper Masala: Easily my most favourite dish on the menu! The lamb was melting in the mouth! It was cooked so perfectly! The chunks of mutton had flavour till the very centre and was immaculately made. Grounded pepper, tomatoes, onions- that's what the menu said. But oh my, the chef needs a round of applause for this! I was instantly transported to Kerala when I tasted this. 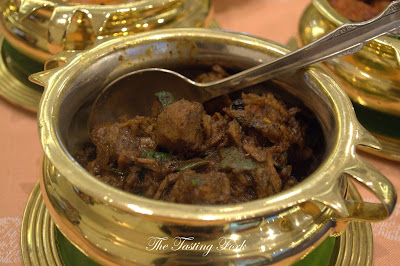 Meen Kolavaithina: This was fish marinated in green chilli, lemon and ginger, and was wrapped in banana leaves. The thickness of the fish was so good, and still the flavour was infused in every bite. The coating of the dish was just marvelous! It was a little spicy, and the fish was simply melting in the mouth (more than the lamb, because of the different types of meats), and the coating of spices was mind-blowing delicious! 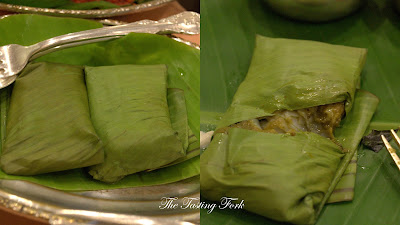 Karavali Meen gassi: This was fish in a thin smooth gravy made of coconut milk and with tamarind. Originally a Mangalorean dish, the gravy is thin and can be relished with appams or rice. The Meen Gassi at Dakshin was so delicious and you could get the aroma of coconut mixed with spices in every bite. One of my favourites on their Karavalli menu. Satisfied my stomach but still wanted more :)

In breads they had the usual appams and neer dosa, but the most fantastic addition was sannas. This was a fluffy pancake that was very slightly sweet and had a coconut flavour in it that wasn't too overpowering. My favourite out of the three breads! The appams and neer dosa were also to die for, but because the Sannas are not a part of their usual menu, I devoured them all the more. 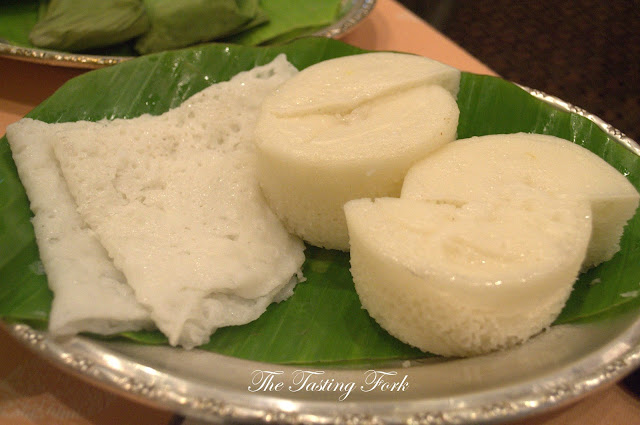 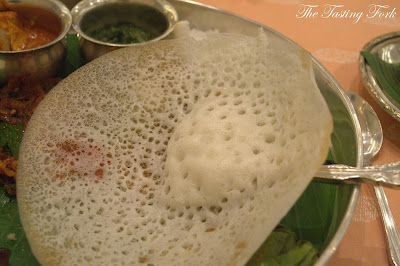 They had special cocktails and mocktails as a part of this festival and I tried the Murugan Mary cocktail. It was made of guava juice and was mixed with a very strong red chilli spice. The spice was the best part about the drink. Not the red chilli we have otherwise, but the red chilli they specially got from the Kanara region. 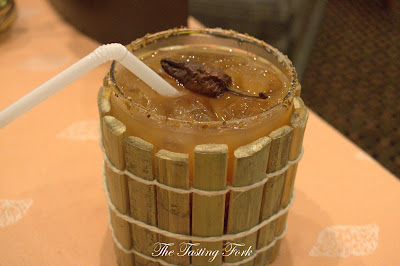 How do you go to a Coastal/South Indian place and not have their Filter Coffee! Really really delicious! One of the chefs even came to the table to mix the sugar in our coffee because the glass was too hot for us to hold. What a sight that was! 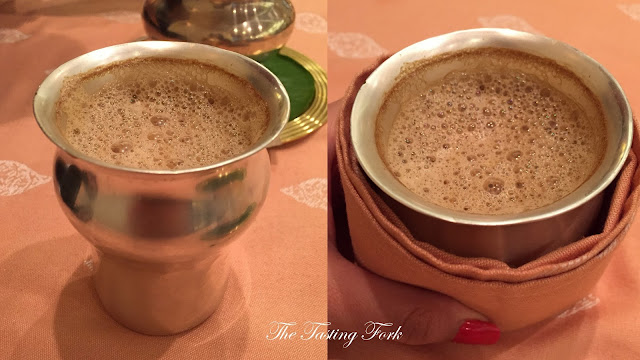 The Karavalli menu has two desserts- Kasi Haluwa (pumpkin cooked with saffron) and Ananas Kesari Bath (semolina cooked with pineapple juice). The Kasi Haluwa was pumpkin grated finely and mixed with saffron. It was too sweet for my liking and I could only manage 2-3 bites. But the Ananas Kesari Bath was phenomenal! Almost all South Indian restaurants have Kesari Bath in their dessert menu but this was a league ahead. It was subtly flavoured with pineapple juice and was not at all overly sweet- just apt. It was so so delicious that I wiped off the entire katori. 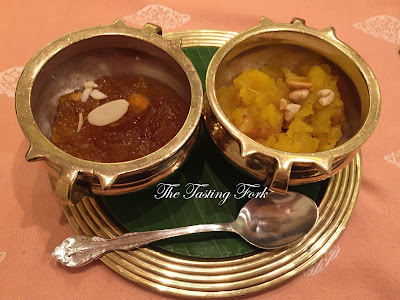 I had heard a lot about Dakshin but never thought their food would be SO good. Surpassed my expectations and left nothing more to be desired.

A special mention for Chef Velu- he was very very kind and patient to be explaining whatever I asked him about each dish. Not once did he feel agitated or irritated- was completely in his comfort zone and super sweet in answering all my questions. Not all chefs are this patient and intensive in explaining about the food they cook.

It's a five star property so the food is priced on the higher side, but when compared to other five stars it wasn't even half as bad. Specially the seafood dishes being priced so well. Though I think the breads could have been cheaper but then you would get complete worth of your every single penny spent here.


Disclaimer: This review was done on an invitation from the restaurant. The views expressed are unbiased and objective in nature but readers may exercise their own discretion.


Connect with me on