California Pizza Kitchen is holding a Mexican festival called 'Mexifornia' in which they're showcasing the Mexican twist in their pastas and pizzas alongwith having dishes solely being Mexican in nature. The festival is proving to be really surprising for people as nobody ever wondered Mexican flavours could go so well with Italian. Some of their pizzas are a must try during this festival which is on till the 21st of June. Also, the nachos are a must must try!

We started off our meal with CPK Nachos and Chicken Tomatillo Chille. The Nachos were too too delicious! Crispy nachos lathered with a cheesy sauce, chopped tomatoes and jalapenos, and some yummy sour cream to top it off. An excellent appetizer. The chef who is now heading operations at CPK has aworked with Hard Rock Cafe for 5 years, so the yummy nachos were natural for him to make. :) The Chicken Tomatillo Chille was also superb in taste. It had a lot going on in terms of the flavour. Shreds of chicken with all three bell peppers, onions and a chilli sauce that wasn't too spicy but was smacking for the flavour. With crispy tostada chips around it, this appetizer too was a hit. 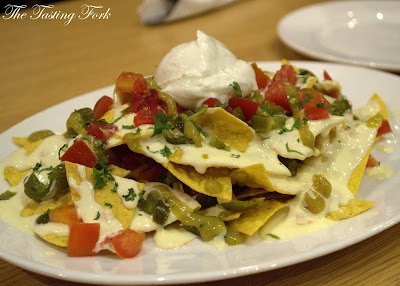 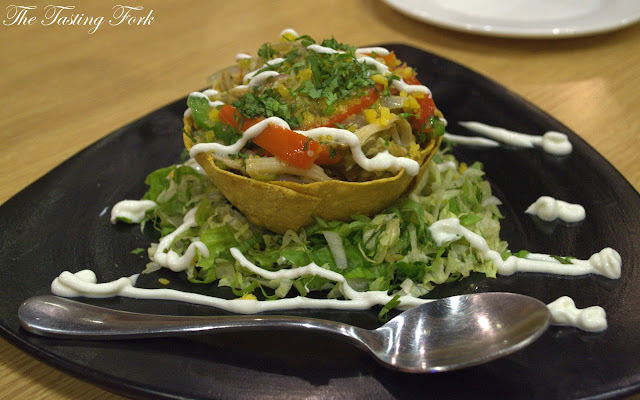 We tried the Crispy Tortilla Salad both with Paneer and Chicken, and the salad was superlative in my opinion! Lettuce and tostada chips tossed in a ranch dressing with fried chunks of paneer and chicken. It also had cherry tomatoes that I absolutely hate so I kept them aside. The salad was extremely fresh and at a very cool temperature- elevated it superbly. 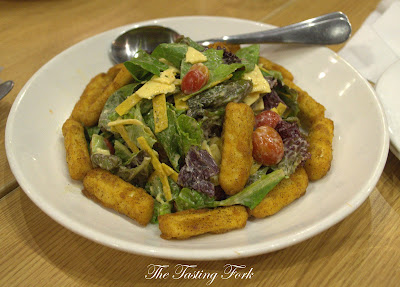 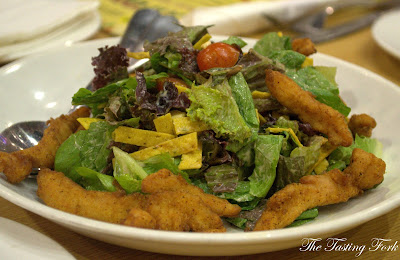 We tried almost all the pizzas:

Mexican Habanero Pizza- This was supposed to be their spiciest pizza, but it wasn't so. The pieces of paneer tossed in a basa sauce and pieces of habanero chilli were nice but the paneer tasted bland to me. The pizza overall failed to make any impression. 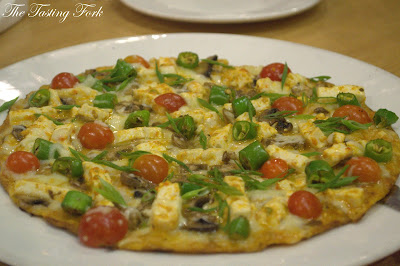 Mexican Veggie Pizza- A typical Mexican pizza with the bean sauce dominant in each bite. This was a subtler pizza with babycorn, onions, pepper and jalapeno. The babycorn didn't taste nice to me in this pizza but the crispy thin crust was spectacular! 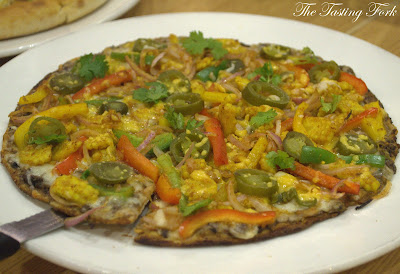 Chicken Asada Pizza- This was a normal base pizza that I completely fell in love with! The base was so delicious, the onions and bell peppers went so well with the chicken. This pizza had cheddar and fontina cheese and had a cilantro pesto sauce in the base that added a lot of flavour to it. My favourite one from their Mexifornia menu. 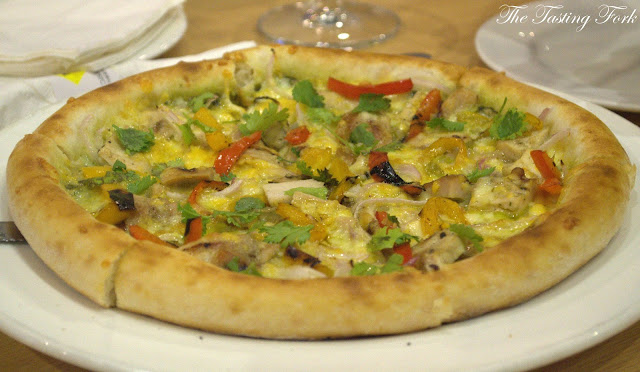 Fettuccini Heidi was more on the sour side with onions and bell peppers in the pasta. Didn't like this one. Also tried the Cheesy Chimichurri Penne which was penne mixed with a green chilli based sauce. The green chilli flavour didn't work for me at all. Sadly both the pastas didn't create an impression. 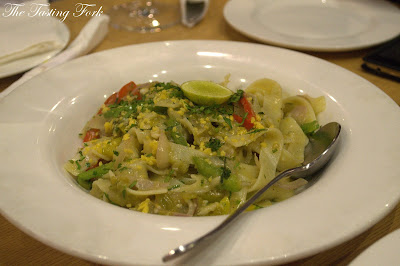 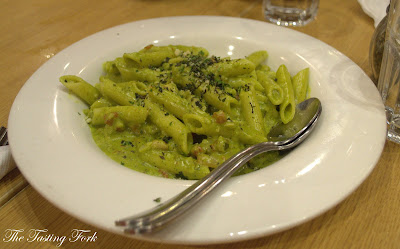 Southwestern Chille Chicken was a chicken breast with some tomato salsa, sour cream, and a shredded lettuce and tostada salad mixed with avocado sauce. The grilled chicken breast was laid on a bed of mashed potatoes that were outstanding! The chicken and mashed potatoes were the best soul food on the menu for me. Creamy mashed potatoes and tender chicken coated with a cheesy sauce and green chilli sauce that was Mexican in origin. A very nice dish to order. 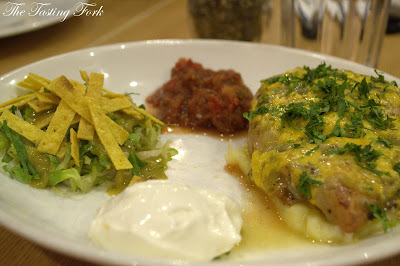 New Mexico Basa Fish was another very good main course that they've added in this menu. In an otherwise chicken dominant menu, this addition of seafood is a good call. The fish was wrapped in a banana leaf and was coated with a green chilli and baja marination and cooked on the grill. Not at all heavy on the stomach and very delicious. 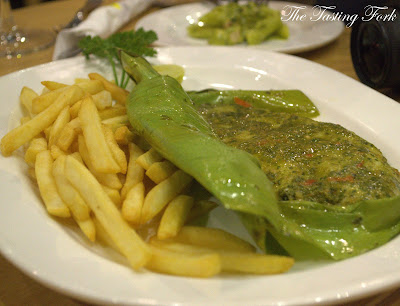 Mexican Caramel Banana Flan and Trio of Chocolate Mousse. The Mexican Banana Flan was made of vanilla sponge, banana slices, banana flavoured cream, and a drizzle of caramel sauce on top. Not overly sweet and very nice on the palate. The Trio of Chocolate Mousse however was a disppointment. It was made of white, dark and milk Mexican chocolate served in a cup made of dark chocolate. It sure was a treat for the eyes to see this art on the plate, but wish the mousse would have been delicious too. 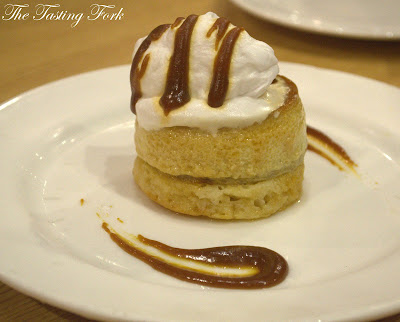 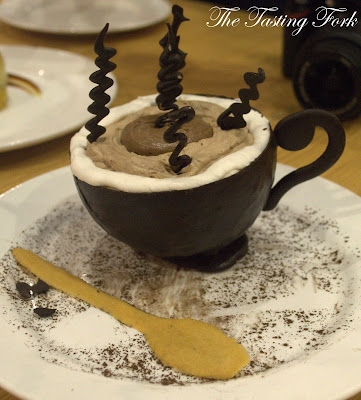 They have a range of cocktails and mocktails too specially designed for this festival. The Fresh Fruit Margaritas are really yummy with Watermelon being my favourite and Green Apple being the second in line. The Pineapple and Passion Fruit Margarita was sad though because of being too too sweet. 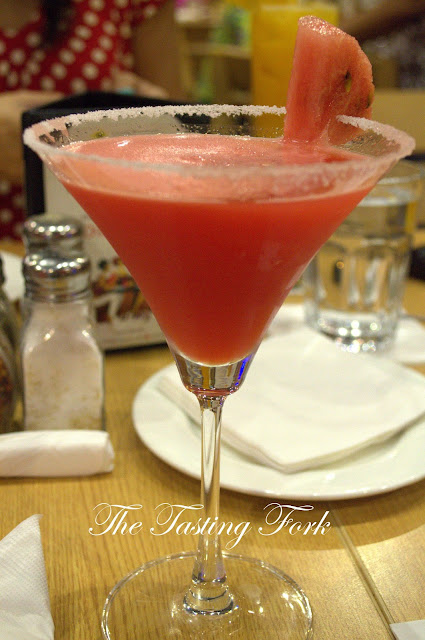 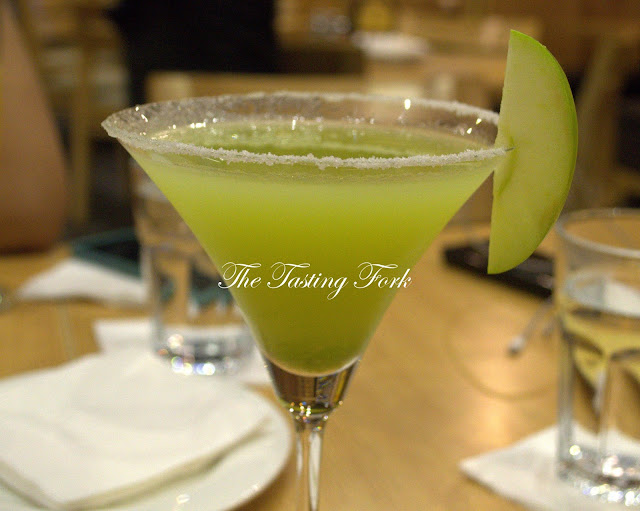 The Mexifornia festival has a few misses in terms of pastas and a pizza or two but it has a lot of hits too with the salads, nachos, appetizers and pizzas. The prices aren't sky-rocketing high and the place has a good vibe to it. The normal base pizzas are to die for and I would definitely go back for the salads, nachos and Chicken Tomatillo Chille too.


Disclaimer: This review was done on an invitation from the restaurant. The views expressed are unbiased and objective in nature but readers may exercise their own discretion.

Connect with me on