Another addition to the ever-so-bustling food scene of Connaught Place. The Junkyard Café is by Umang Tewari, the same person behind Public Connection and Garam Dharam, among many others, and Junkyard is his best venture by far according to me. Innovative, quirky, modern and fun- that’s how I would describe this place. 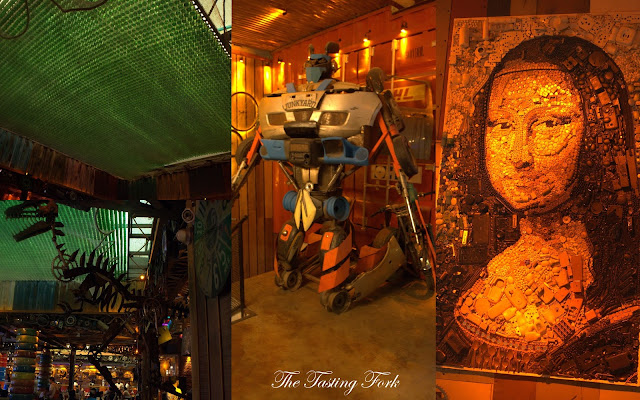 Everything here is made of junk. Junk, something that doesn’t hold any value for someone, but may so for someone else- that is what the concept is. The décor, the utensils, the presentation, everything is made of junk material, but it doesn’t like the common conception of junk; it instead looks brilliant! Drawers, old typewriters and recorders, tyres, metal, glass bulbs- you name it and they’ve made something out of it. The bar looks fantastic with the light (was told it’s the longest bar in CP), one side of the restaurant has a ceiling made of hundreds of bottles, a robot made of junk metal, a dinosaur made of junk, walls made of tyres, drinks served in bulbs- there’s just too much intricacy in these fine details. The place has colour in everything! It looks so vibrant and appealing! 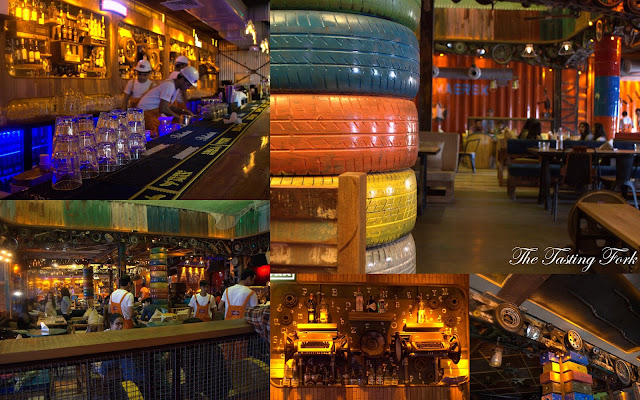 While the Cold Mezze Platter is a complete beauty in itself, the Mughlai Non Veg platter consisting of Fish Ajwaini Tikka, Chicken Tikka and the likes is equally great! The mezze platter is served with pita that has cheese in it (takes the platter to a whole new level). Each dip is so so delicious and so beautifully presented. The soft succulent pieces of chicken and fish tikka were really well marinated. The Onion Rings are nothing to write home about but the Paneer Tikka is good. Served with coriander and mayo based chutney, the paneer is really well prepared. 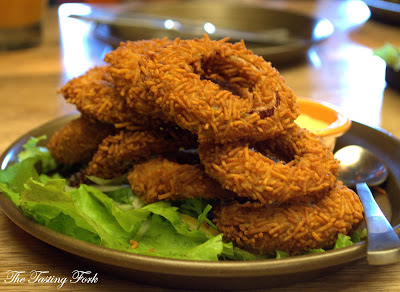 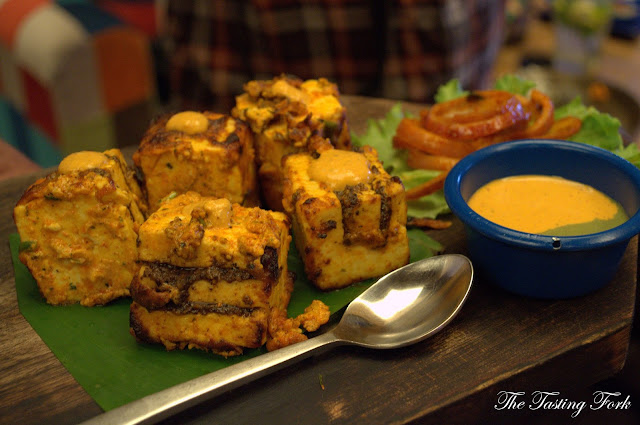 The Kabuli Badami Seekh is very soft and really delicious. A winner for the vegetarians! And the real game changer for the non vegetarians is the Five Spice Chicken. Very well-seasoned chicken, slightly spicy and tossed with tomatoes and onions, served on pita with some kickass hummus on the side, the Five Spice Chicken is a must must order! The hummus is extremely good! 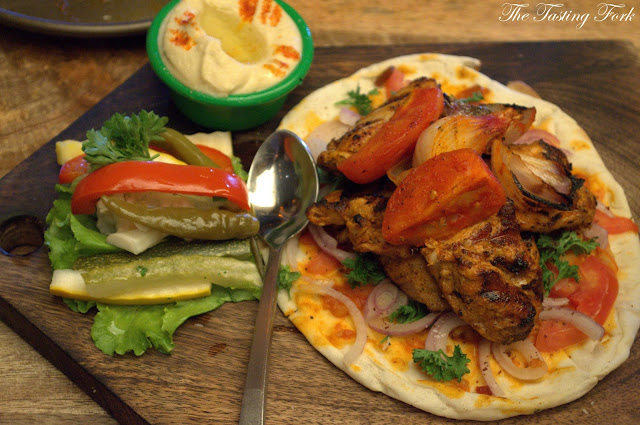 The place also does Chello Kebab that’s nice, but nothing when compared to the original.
The Nachos Overload with Chicken aren’t as good as the name suggest the dish to be. They aren’t ‘loaded’ but are the basic nachos that most places do. The sushi here was really good! The place knows how to do their sushi well. 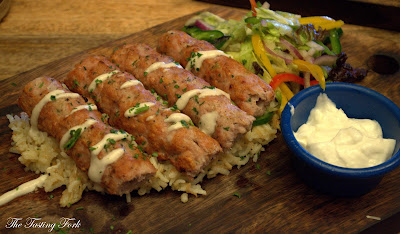 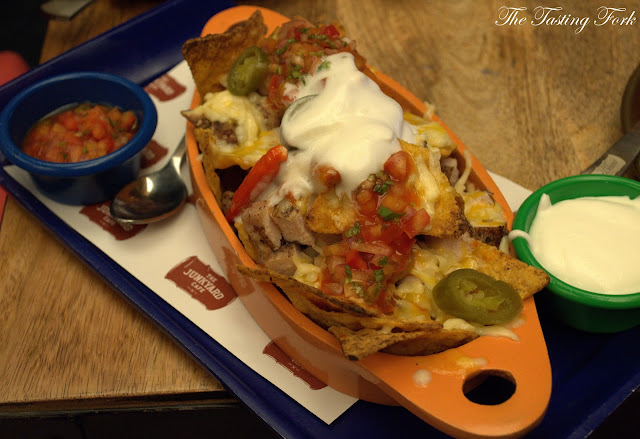 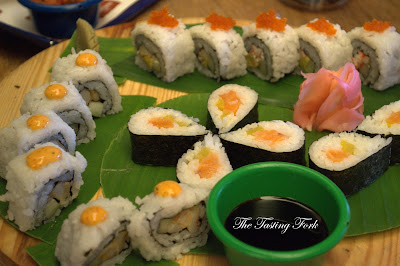 Tried a few drinks out of which the Vodka, Watermelon, Basil, lime Juice- Edison Bulb Yard stole my heart!! The drink is presented exceptionally well! Full points for the innovation and thankfully full points for the drink as well. Served in a bulb that’s inside a glass, they have the nitrogen bit going on when the drink is served. Saw another drink served inside a skeleton face and people were going gaga over that one too. 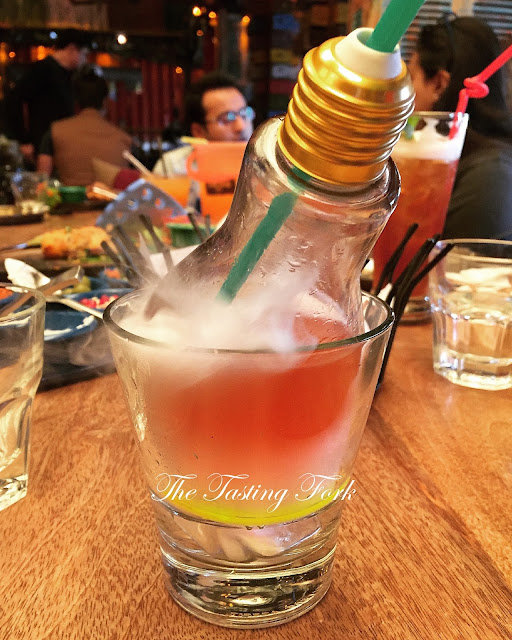 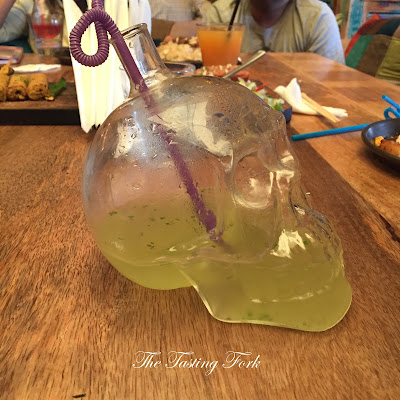 For desserts we tried Oreo Cheesecake and Chocolate Cheesecake. Both were nice, but the Oreo one was better for me. Delicious cheesecake with amazing chocolate and oreo setting and hazelnut nutella on top! 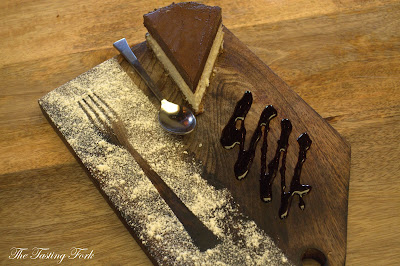 The place has fared really really well and in no time it has become people’s most frequented joint in CP. The presentation is great, the drinks are great, the food is good and they have a decent mix of multiple cuisines (synonymous of a cafe opening in CP). They serve sheesha and that is where most of their afternoon and early evening crowd comes from.

The place is huge with both an outdoor and indoor seating, the ambience is really quirky, and the staff knows their deal. The menu has something for everyone, and the concept of using ‘junk’ is applied to their food too. If they know that a certain amount of protein is going to go to waste, they make sure they turn it into some other form for it to get used. Great to know that a restaurant is being responsible.


It’s a fun place for an outing with friends, chilling in the evening or just going out for some delicious drinks! Another one added to the CP bandwagon!