There isn't anything that I won't use in my praises for Depot 48. It is one of the consistently finest places Delhi has, serving some of the most amazing fare! Run by Vikas Narula and Girjashanker Vohra, Depot48 is their second baby, after the first one, Depot29, in Safdarjung Enclave. Situated in the posh buzzing market of Greater Kailash 1 N-Block, I'd say they have no competition keeping in mind the unparalleled mix of European, American and Mexican they serve and the standard they've maintained of their food and service.

The interiors of the place are done up in shades of brown and black, with eccentric purple and blue lights being added to the mellow yellow. A long bar on one side with tables and sofas spread across the restaurant, they also have an area dedicated to live performances that both their outlets are really famous for. The most striking feature in their decor is a wall made of old casettes. Casettes that we used with tape in our stereo systems a long time ago. So cool! 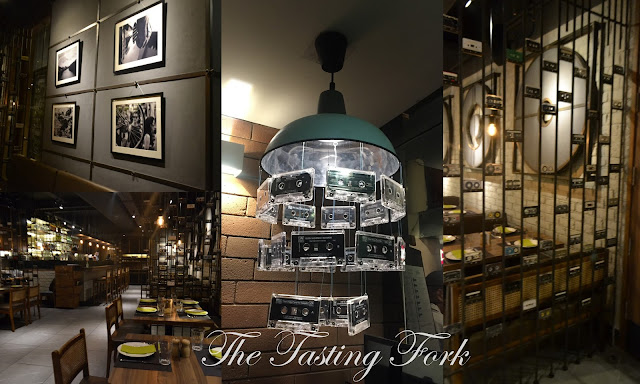 I've been to Depot 29 several times and to Depot 48 twice. My experience is based on two very different nights- one extremely packed and buzzing with a superb band performance, and the other on a weekday night when the restaurant was comparatively quiet.

Their Spanish Artichoke and Spinach Dip with homemade tortilla chips is absolute addiction. The dip that is served warm has a thick consistency, has superb chunks of artichoke in it, and the creay texture with the spinach is to die for. I'd say the same about the new addition to their menu Chicken Wings. Chicken Wings that fall off the bone so beautifully, and that have such an amazing sweet and spicy rub on it. Served with a blue cheese dip that balances the flavour of the wings. You would want to lick your fingers after polishing the plate off- that good. 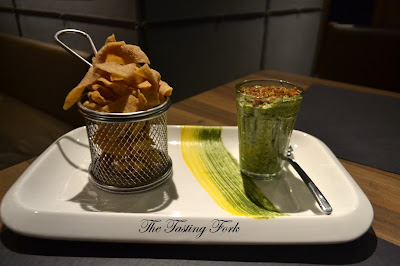 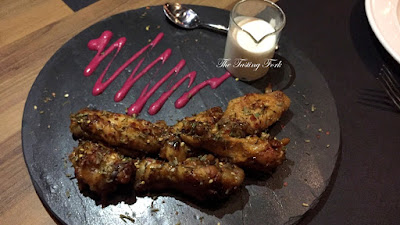 Their Zucchini, Olives and Jack Cheese Quesadillas are also a new addition from what was available at Depot 29. A sharp taste from the Jack Cheese with the flavour of olives and some zucchini. Given a choice I'd order the refried beans, jalapenos and jack cheese quesadilla over this but this doesn't mean zucchini and olive lovers won't like it. It's damn nice! The Garlic and Rosemary Minced Meat Empanadas are a dream. A droolworthy stuffing of minced meat with a thin coating of the empanadas, served with a creamy herb dip. I think Depot does phenomenal empanadas! If there's one thing I would always order here, it's the empanadas. It's a tough call between the empanadas, quesadillas and burgers, but I would always go with the empanadas. 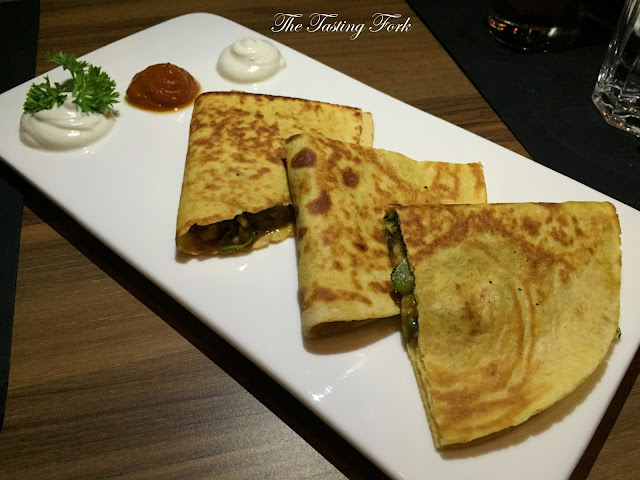 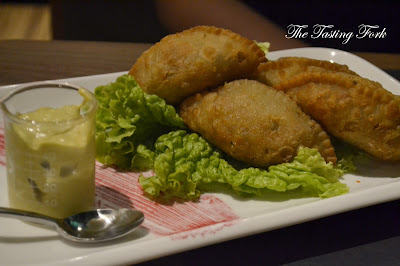 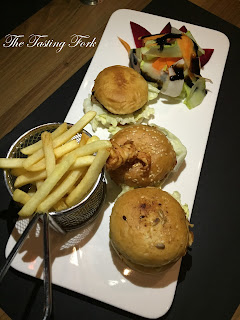 Their Non Vegetarian Slider Platter is a greta deal for those who want to try a variety of burgers. Took the Lamb Burger, Crispy Chicken Burger and Surf & Turf. The Crispy Chicken is my all-time favourite. Ordered this on both my visits to Depot 48. The next favourite would be the Lamb Burgers. What all their burgers have in common are the soft buns (each different for different burgers), a juicy patty, and a flavourful stuffing of other elements. On the night that the restaurant was relatively empty, the staff had a lot of misses. One of which was getting onion rings with my burger when I ordered for fries. Their onion rings are brilliant nevertheless, but not so great when a person wants to have fries. The Vada Pav Burger is another stunner. You would expect such a fine place to do a shabby job at a vada pav (at least I did), but they got everything right in it. The bun, the coating of the vada pav, the stuffing, everything! 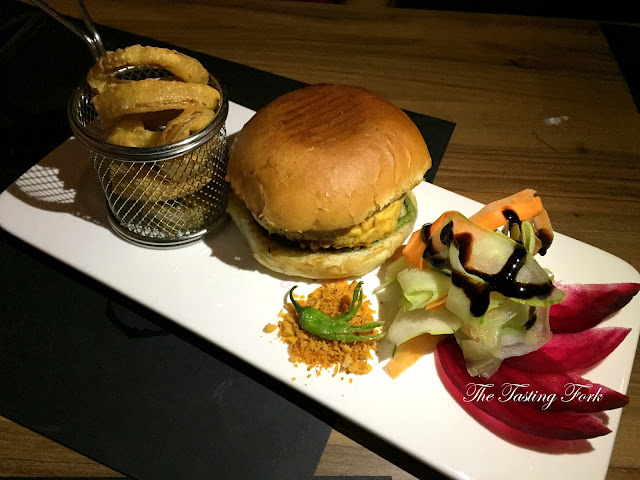 Upon the server's recommendation I ordered the Coffee Marinated Mutton Chops with balsamic reduction. The meat was so tough that I had to literally throw out chunks of meat from my mouth into the tissue paper. Crazy good flavours, a yummy sauce with the mutton chops, a gorgeous creamy potato mash on the side (which was my only saving grace), but it all came falling down like a pack of cards because of the extremely chewy meat. But given my innumerable awesome experiences at both their outlets, every kitchen has an off day. So when the server asked me if he could get the dish made again or get something else in place of it, I didn't ask for it and went on to dessert. Dessert and Depot's waffles are synonymous. You cannot come here and leave without having their legendary waffles. On my first visit to Depot 48 I stuck to the Chocolate Gianduja Waffles which were flawless like always. No other way to describe these waffles. But on my second visit I decided to go ahead with their Gooey Chocolate Cake with Vanilla Icecream. Insane to another level! A dark chocolate with cake, something that simply makes you go 'wow'!  The server then told us to wait for a few minutes because he had ordered for waffles for us, to make up for the chewy lamb. Indeed a sad day for both the kitchen and us, because for the first time in the history of me going to Depot29/Depot48, the waffles were undercooked. I just left it at that and felt so bad for the server trying to make up for it that I didn't even complain. One of the off days that in no way change my opinion about Depot 48 or 29. Their waffles are still the best in the city, and by best I really do mean THE BEST. The place still remains outstanding with their food and service and the band performances they have only add to the beauty of it. 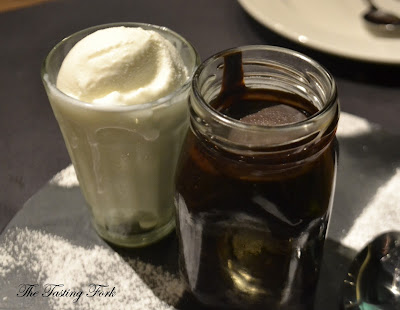 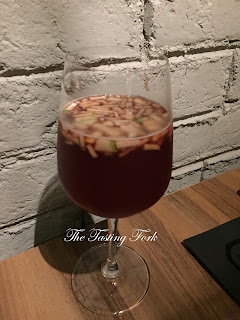 I think I've tried all of Depot 48's cocktails by now (considering a few of them are the same as Depot 29). Maicuba is a drink for those who don't like very sweet drinks. Cucumber, tequila, ginger, a slight tinge of mint and some lemon. Their Red Wine Sangria is a decent one too- my safest option when I don't want to have vodka/gin cocktails. Their Englishflower and Basiltini are superb cocktails too. Anything with elderflower has my heart, so I won't even give a reason why I love Englishflower. Just know that it has elderflower and guava. The Basiltini is a very fruity cocktail. With passionfruit syrup and apple juice, there's no going wrong with this one if you like your drinks fruity. Their Vodka Sour is mango based, with a nice sour-y tinge to the drink with masalas. Mango juice with a little bit of ginger, and an Indianised touch to it with the spices. 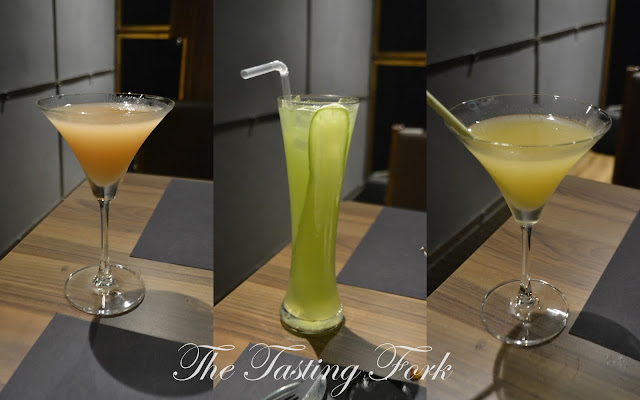 I'm so happy an outlet of Depot has opened that's even closer to my place than the previous one. Amazing food with amazing drinks, and an added bonus of superb performances by various bands lined up at Depot48. For someone who hasn't tried even Depot29, please go to Depot48 ASAP. And for someone who has, go to Depot48 for a different decor and added options in the menu. Love this place!