8 Delicious Places In Amritsar You Cannot Miss Eating At!

I have been to the Golden City a total of three times in my life, and the last two times were over a span of 25 days. A visit to the Golden Temple took me to Amritsar but my love for food took me to 10-11 places in the first visit itself (which was for about 20 hours in Amritsar).

A problem that I faced was to narrow down on 3-4 meals from the best places in Amritsar. I researched a lot, read so many blogs, spoke to so many people, and made a list of 12 places that I aimed at going to and making the most of my trip. I could do 11, but missed out on a chaat place sadly.

When I visit a new city/town, I make it a point to be thorough with my research, but a research on Amritsar is of no use if you don't spend at least a week eating your way through the city. It's only then that you can maybe come close to doing justice to the food.

I have still attempted to make a list of places that you should blindly go to when in Amritsar. And considering how most people only go for the Golden Temple visit and have a thing for going to Wagah Border too, they're not left with much time to explore the city. So for that short span of stay where they go out to eat, they have a hard time in deciding where it should be. Hopefully, this list should help you with that.

I went to each one of these places and tried their food over 2 different occasions, so I'm very sure the consistency is great too and the food will be just as awesome every single time. So here are the best places in Amritsar to eat at, in no particular order. 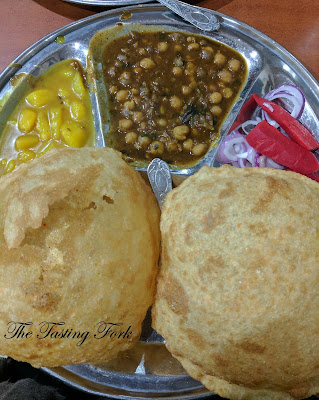 You’re not allowed to share your plate of poori here because the subji is served endlessly.

School kids, locals, tourists- I saw everyone at Kanha Sweets. And it really should be your first stop in Amritsar!! The pooris are so thin and light, and the chhole nothing like you get in the cities. It's almost unreal. 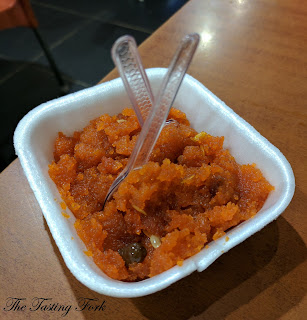 Do not come back without having their famous Red Halwa which is essentially suji ka halwa with a red colour put in it. Hyped for the red colour but is so so good in taste. For those of you who like Lassi, they do an incredible lassi too. 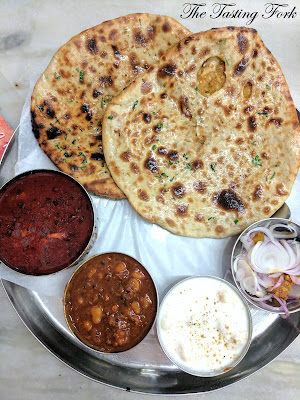 My most favourite pick out of the plethora of dhabas that are famous in Amritsar. Situated inside an extremely narrow lane, they have seating both on the left and right side of the narrow street. Choose the seating with more lighting as that’s for families.

The moment you enter you should order their thali!! Take your pick- parantha thali or kulcha thali. Both are irresistibly good and the subjis given is the same in both too- Chhole, Dal, Raita and salad, with either two paranthas or stuffed kulchas. The thali is sufficient for 2 people if you have a decent appetite, but of course you should overeat when you come here, so order more and stuff yourself!! 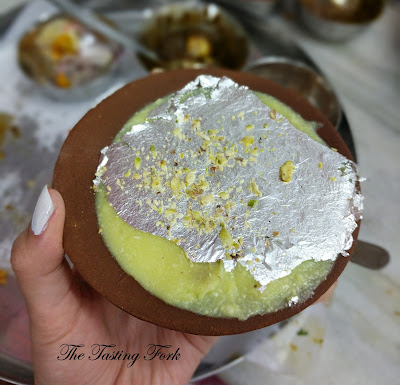 Apart from the thali they do dishes on ala carte too, both in half and full portions. You cannot miss out on their Palak Paneer which is only on ala carte. The craziest Palak Paneer I have ever had, no kidding! End your meal on a sweet note with their insanely famous Phirni with silver warq on it. 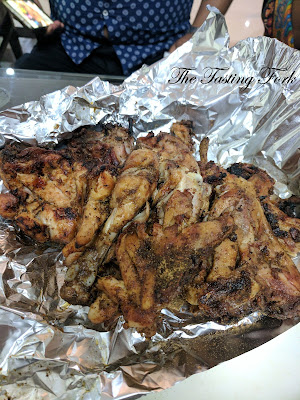 They serve food in the car and also have a restaurant that is divided into two floors- ground and first. The chicken is to die for, and that's the only thing I've had here. Right next to Beera Chicken is Makhan Fish, which I didn’t like at all, and this is when I visited them twice so I'm sure my taste buds can’t be so screwed both the times. Overhyped and overpriced- can be easily given a miss. 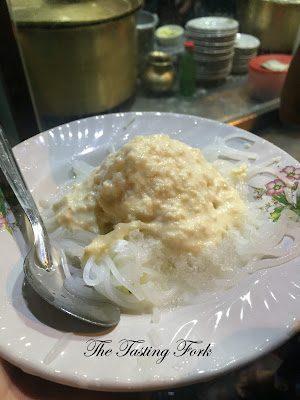 What is a kulfa? It’s kulfi with gondh, kewra, phirni, falooda and sugar syrup. Don’t go by this description, go to my Instagram page and see the video of the person making this kulfa from scratch. But no description, no video can do justice to how this kulfa tastes. It is heavenly! You would have never tried anything like this in your life before, and there’s a reason why it’s called ‘A-One’. Because it really is A-one. It’s pure bliss, and I can go back again and again to Amritsar only for this kulfa.

There are long queues of people here everyday, but weekends are even more maddening. People recognize his pictures on portals and social media with his exclusive plate that he serves the kulfa in. It’s quite classy a plate for serving a kulfa in which is only for 60 bucks. Legendary in every sense! 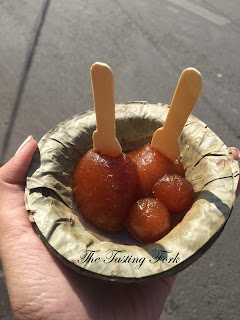 Their Gulab Jamun comes in two sizes, and is simply melt in the mouth! But don’t go here too early in the morning because they may serve you the previous day’s stock. Go anytime after late afternoon. 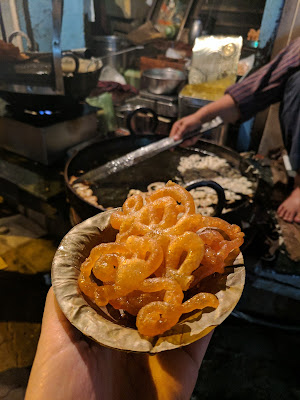 When you go to Golden Temple and come out and take a stroll in the market, also known as the townhall now, you simply have to take a left turn and go to the Jalebiwala Chowk. Why are we going here but? To have jalebi from Gurdas Ram’s shop! This sweet shop has been so iconic, that the chowk (crossroad) itself was named after this shop. There are a lot of chaat shops and hawkers that have set shop at this chowk now, but the major crowd-puller still remains Gurdas Ram’s jalebi.

The best part about this sweet shop is that it hasn’t let fame affect its operations. The jalebi you get here is always piping hot, because no matter what time you go here, they’re always making fresh jalebi, never making jalebi in bulk and selling later. That’s what makes this place so desirable and why the legendary place still sells because of its offering, and not tourist value. And the jalebi isn’t overhyped. It really is very good.

You may also want to go here for the stories attached with it, if you don't have a sweet tooth and don't want to go for the jalebi. There’s a well dug up inside the shop that was used for taking out water for the sweets back in the day. imagine! A well inside the shop! It isn’t operational now, but you can still see the well if you go in broad daylight. It’s right behind the kadhai where the jalebi is dipped in chaashni. 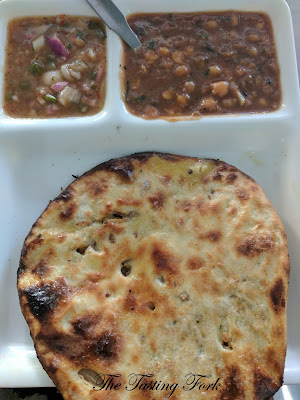 Situated right opposite MK Hotel, Kulcha Land is the most famous kulcha place in Amritsar, and that’s exactly why you will see the tourists only coming here and not going anywhere else (specially the foreigner crowd).

You cannot describe the kulchas you get in Amritsar, but here's a little ideas- they’re flaky, they’re crisp, they’re extremely soft yet firm, they retain their crispness and have a tandoor char on them, they’re stuffed with mix veggies and they come with lots of butter. There, I attempted a description, but they’re beyond all these words used. They’re brilliant! And the chhole and imli ke pani wale pyaz are absolutely perfect! Something to note- places in Amritsar don’t do variations of kulcha stuffings. They only have one stuffing and that’s aloo. Unlike Delhi where you get aloo, paneer, gobhi and mix options, over here there’s just one aloo option and it’s out of this world! But, at Kulcha Land you get an option of aloo AND paneer.

I went to another kulcha place in Maqbool Road and preferred that over this, but my mom preferred this one. Kulcha Land is more hygienic, has a proper seating, the service is good, and so on. And the one on Maqbool Road was literally on the road with just a few plastic chairs and tables laid. Hence, maybe why my mother liked this one more. Or maybe I liked that more because it was more rustic. But I'm sure it had nothing to do with which kulchas were better, because both of us were in heaven after tasting the kulchas at both these places. So for the sake of people not falling sick from eating at roadside dhabas, I will stick to Kulcha Land as the best place to go to for kulchas. 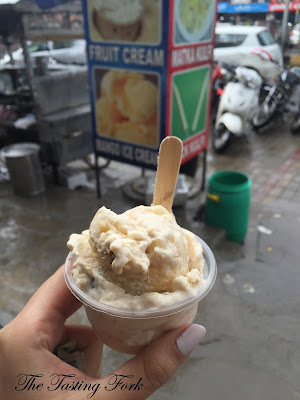 Situated towards the end of Lawrence Road when coming from the Kanha Sweets side, Durga Icecream is an icecream parlour that also has a lot of video games for kids. I went here only for one reason- to have their Fruit Cream. Creamy, velvety, slightly frozen with crystals of ice coming in each bite, fruits diced and mixed in the cream. This isn’t fruit cream but fruit icecream, but it also isn’t made only with icecream. It's a mix of icecream and cream. Like most things on this list where I failed to describe what it tastes like, I do not have words to describe this fruit cream too. A must must must try!

I am yet to explore a gazillion more food joints in Amritsar. After all, there can be no comparison with the food you get here. It's pure, it's soulful, it's unparalleled. I already look forward to my next trip to Amritsar and this time it is going to be all about the hidden gems!